UPDATE: I spoke to someone from the restaurant today on May 11th to address my concern. They stated that they are trying to ensure their patrons are safe and would like to phase out the searches and pat downs in the future. The representative stated, since they updated their security service, the security checks are happening for all patrons during all meal services. I mentioned they should include the security check warnings on their website, social media, and online reservations system, like they do the dress code to forewarned patrons before attending. The rep says they’ll mention it to the team (this was not a promise that it will be enacted). I was offered a new reservation to attend, but I declined. Maybe in the future the searches/pat downs will be phased out, but until then, be on the lookout and also see if they’ll actually add the security checks to the disclaimer.

I’ve been viewing the IG video and reels from Kitchen + Kocktails since they opened in October 2021.  After hearing marketing commercials on a popular radio station in Chicago, I figured they must have gotten all the “kinks” out of opening a restaurant in downtown Chicago. The restaurant is located steps away from Trump International Hotel & Tower.

Some of those “kinks” were listed on reviews at Google, Yelp, Facebook, and OpenTable with an average of 2.5 – 3.8 out of 5. The issues ranged from:

After visiting today, I’m able to share my own experiences.

Entering the restaurant, before seeing the hostess, you are first greeted by security. My husband who is in his late-40s, African-American – 6’4 – 215 lbs, was patted down by an older security guard – approximately in his mid-60s. That totally threw me off-guard as I’ve never been SEARCHED AT A RESTAURANT!

As we walked to the hostess, I turned around and asked the guard if he wanted to check my purse too. As if it was second thought, he says, “oh yeah, let me check your purse. Oh you guys are all good.  You guys came at a great time to visit”.  At first that lead me to think because of the time of day and the restaurant was practically empty – like maybe 6 groups were there. I also noticed that practically all the guests were older like us – and that made me think about all the visual marketing I had seen on IG for the restaurant was of a younger audience – and at night.

As soon as we sat down we were immediately waited on.  Our waiter was very friendly, and checked on us appropriately.  We even gave him an extra $10 over the 20% gratuity that is automatically added. 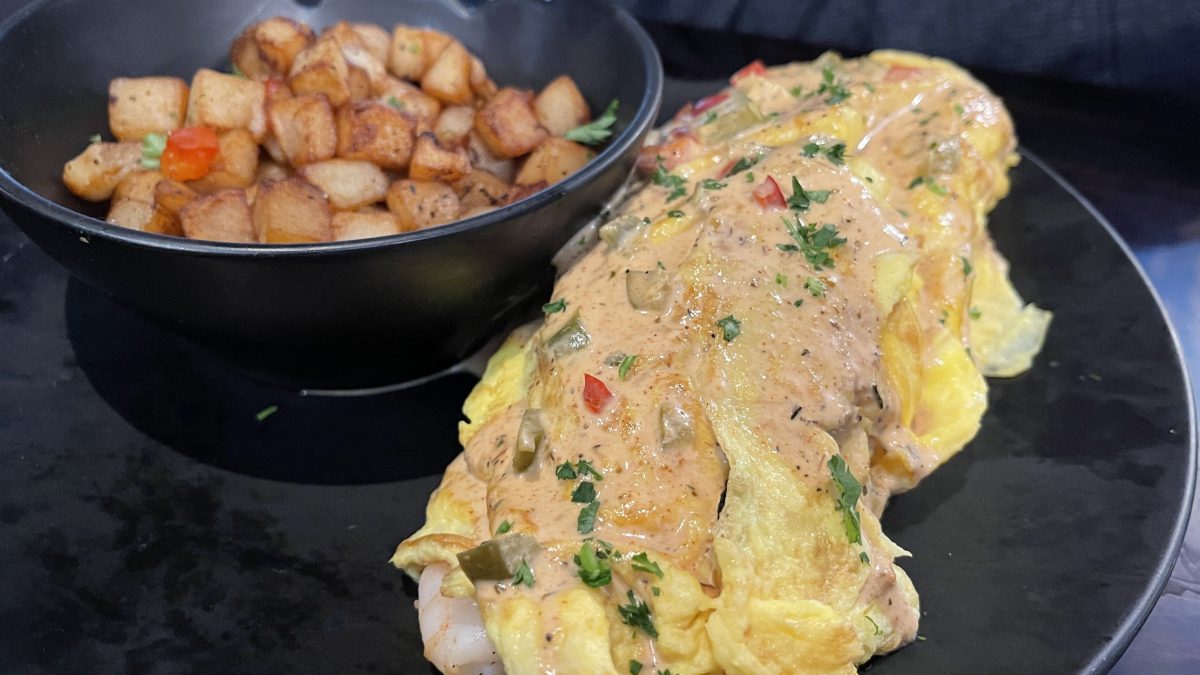 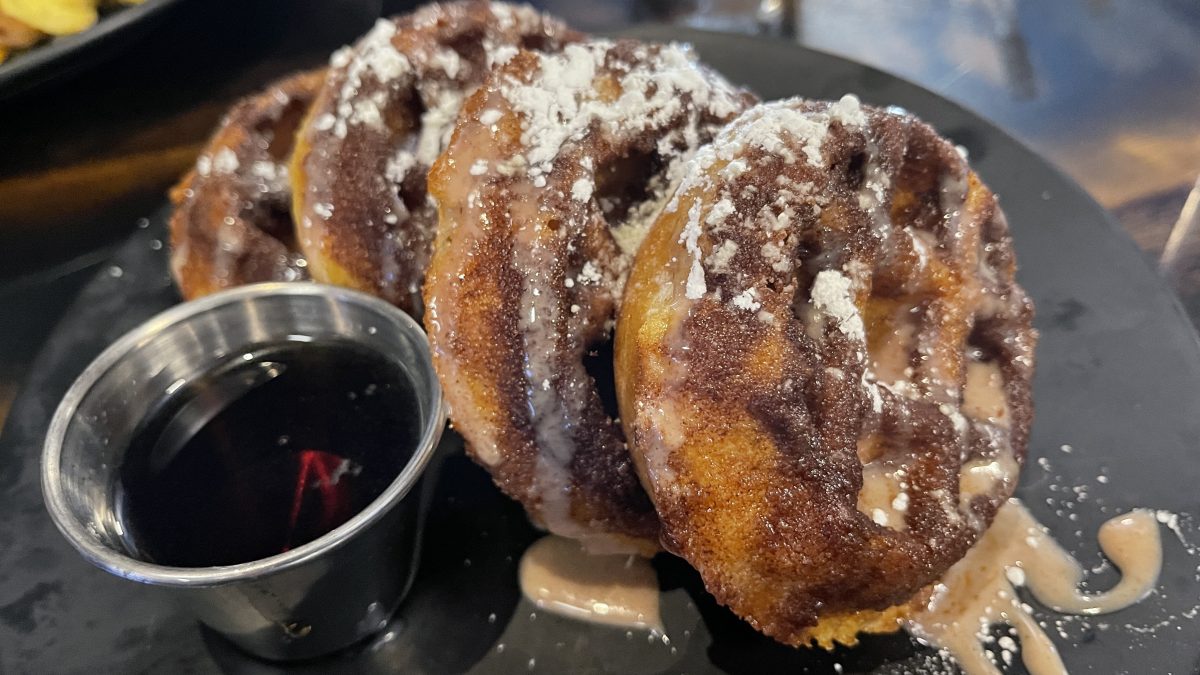 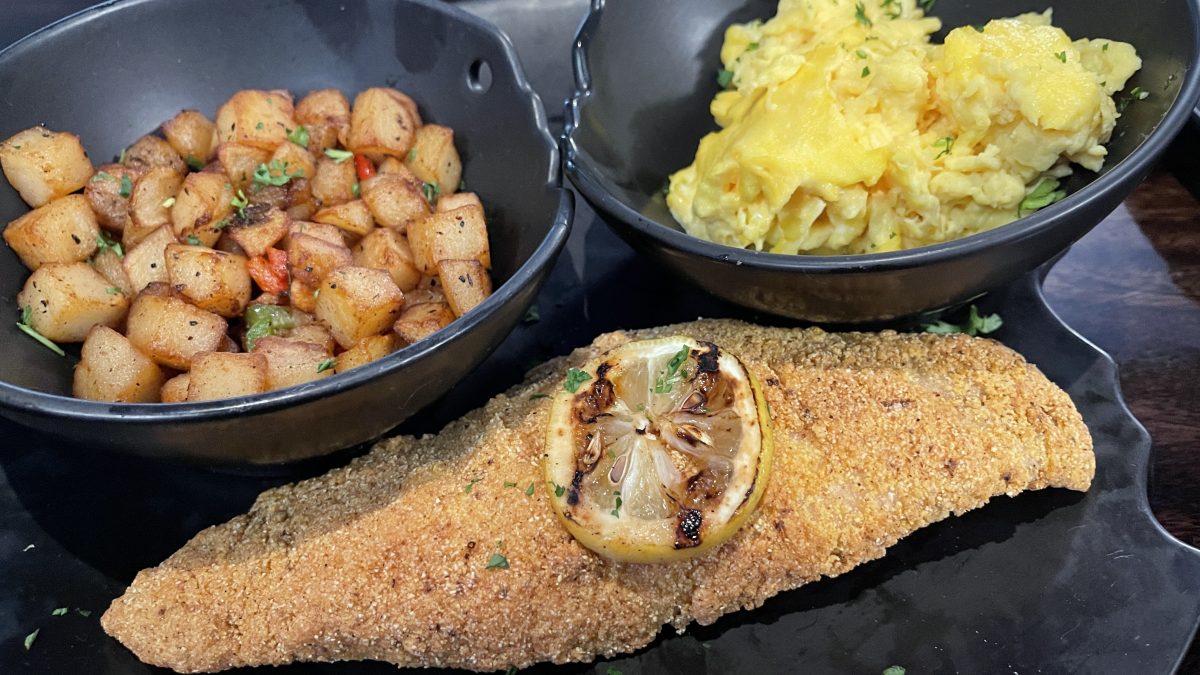 After scanning the menu, we selected the Catfish breakfast that comes either fried or grilled and with 2 eggs and potatoes or grits. We also selected an Omelette stuff with shrimp, sausage, and crab with a side of potatoes. And we added some cinnamon roll waffles which included four – definitely enough to share.

Overall our food service was great, and not too expensive.  Our meals came with side dishes. I did notice that some entrees didn’t include side dishes. They’re shareable sizes – maybe for 2 people. Our cost was only $56, but the tax and automatic 20% gratuity that I mentioned earlier made the bill about $74. We also didn’t have any alcoholic drinks, which started around $22. The drinks are served in nice large glasses, so the cost may be worth it. However, I didn’t taste any, only saw them served, so I’m unsure if it’s truly worth the cost.

It may not be a fact, but I know that it’s true.

WHAT’S THE LOW DOWN?

Back to the nice waiter, I did ask about the dress code policy that is plastered on Open Table when making reservations which includes, no crocs, athletic shoes, hoodies and baseball caps.  As the restaurant was getting more crowded, I noticed practically 80% were breaking the dress code. I didn’t visibly see other patrons being patted down. It may not be a fact, but I know that it’s true, and I swear on both of my grandmothers’ graves, that the white patrons that came in the restaurant weren’t patted down and purses searched. I just can’t imagine that older black security guard searching the group of three white senior citizen men with their wives, like he did my husband and me.

The waiter did say that he’s seen others being patted and searched – no matter the color – but I think he was trained to say that.  He also brought up the shooting that happened outside the restaurant about 3 months ago. The waiter did state the dress code is supposed to be enforced no matter the meal time – brunch, or regular service, but it may truly depend on who is at the front door.  Well that must happen all the time, because even the marketing videos, people were breaking the dress code – specifically the athletic shoes.

This restaurant has patrons that are tourists, staying at nearby expensive hotels, and spending money at nearby expensive stores. I just know what I know…and that is they’re not being searched and they’re gonna walk into this restaurant, wearing what they want, including comfortable athletic shoes, hoodies from their college alumni, etc. And that’s okay. But if you’re gonna have rules, enforce it with everyone – not just the black and brown people that may look “threatening”, or get rid it on your website and on OpenTable.

Will I go again?  Nope! Although the food was really delicious, my husband being patted down, and my purse checked as if I was entering a club “in the hood” left a sour taste in my mouth. And I swear to God, if that happened to us while there was some white folks around and the guard didn’t do the same to them – I would have turned around and would be talking to multiple news stations.

I’ve been to plenty of restaurants in the River North and Streeterville neighborhoods and dropped more than $200+ on a meal with and without alcohol, and was never searched. I’ve even gone to Batter and Berries which is black-owned in Lincoln Park; my husband’s body wasn’t patted down, and my purse wasn’t searched.

There’s more “kinks” for Kitchen + Kocktails to work out, including removing what could be seen as discriminatory and profiling practices. I hope they get these problems resolved as the venue is located in a really nice area and can do very well.