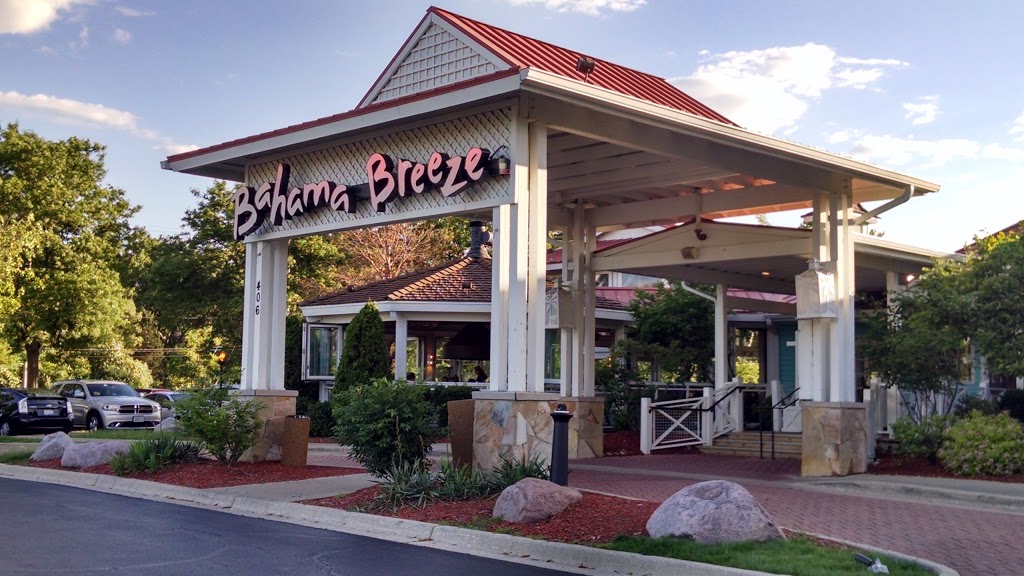 I travel out to Hoffman Estates twice a year to celebrate birthdays for my friend Juanita and me. She has limitations to transportation, and I don’t mind the hour drive on a Saturday afternoon.  There’s definitely less traffic in the Chicagoland area on the weekends. For about four years we had been celebrating our birthdays at either the Grand Lux Cafe in Downtown Chicago, or The Cheesecake Factory in Schaumburg. During one of my recent visits to Woodfield Mall, I saw the Bahama Breeze restaurant, and remembered that’s the restaurant I always see on the back of the Darden Restaurant gift cards with Olive Garden, Yard House, Cheddar’s, and LongHorn. I knew on my next trip out to Hoffman Estates to see Juanita, Bahama Breeze was going to be the next birthday celebration destination. 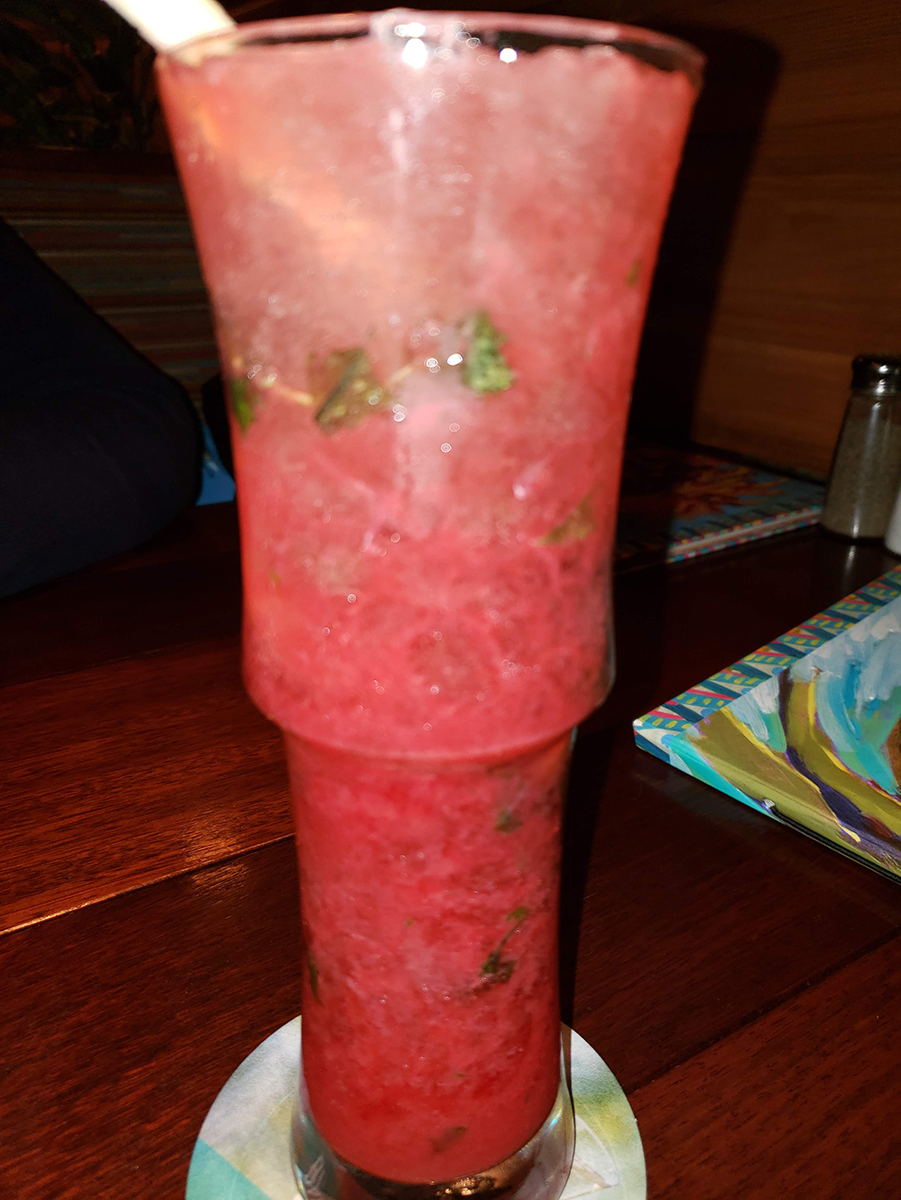 Our first visit to Bahama Breeze to celebrate Juanita’s birthday was in April. Her actual birthday is in March, but with our schedules, April worked best. We were immediately wowed by the decor. It has like a tropical island feel.  Well of course that makes sense with the name Bahama Breeze. We arrived a few minutes after they opened for lunch, and it wasn’t that busy. In fact, Juanita made a point to tell the waitress not to be in a hurry to send out food out; we like to talk and we plan to be here at least two hours. Our waitress was very nice and we made sure to give her a good tip. 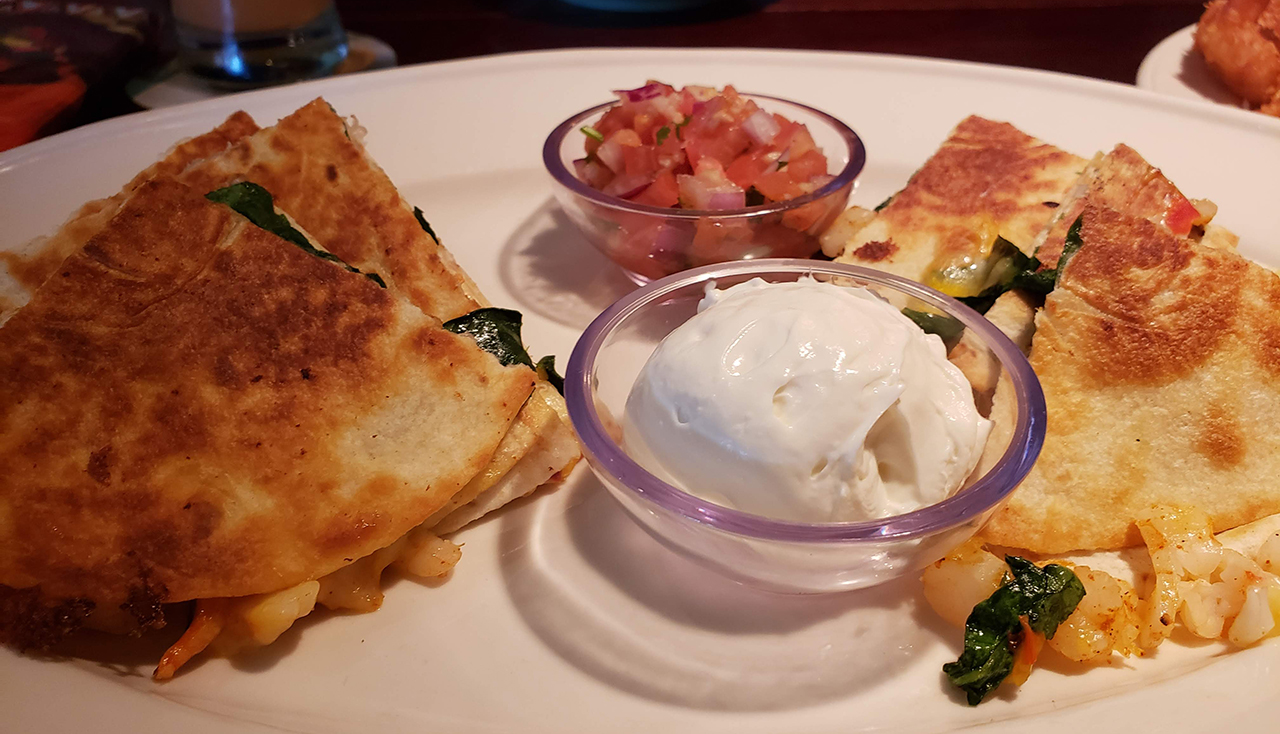 I started off with a Strawberry Daiquiri and ordered Chicken Quesadillas for the appetizer, which was pretty traditional with tortilla, chicken, cheese, salsa and sour cream; but they also added sweet peppers and spinach which gave it a little twist.  We also got a side of fried coconut shrimp – which by the way is the only way I can eat coconut, otherwise it’s like eating hair. 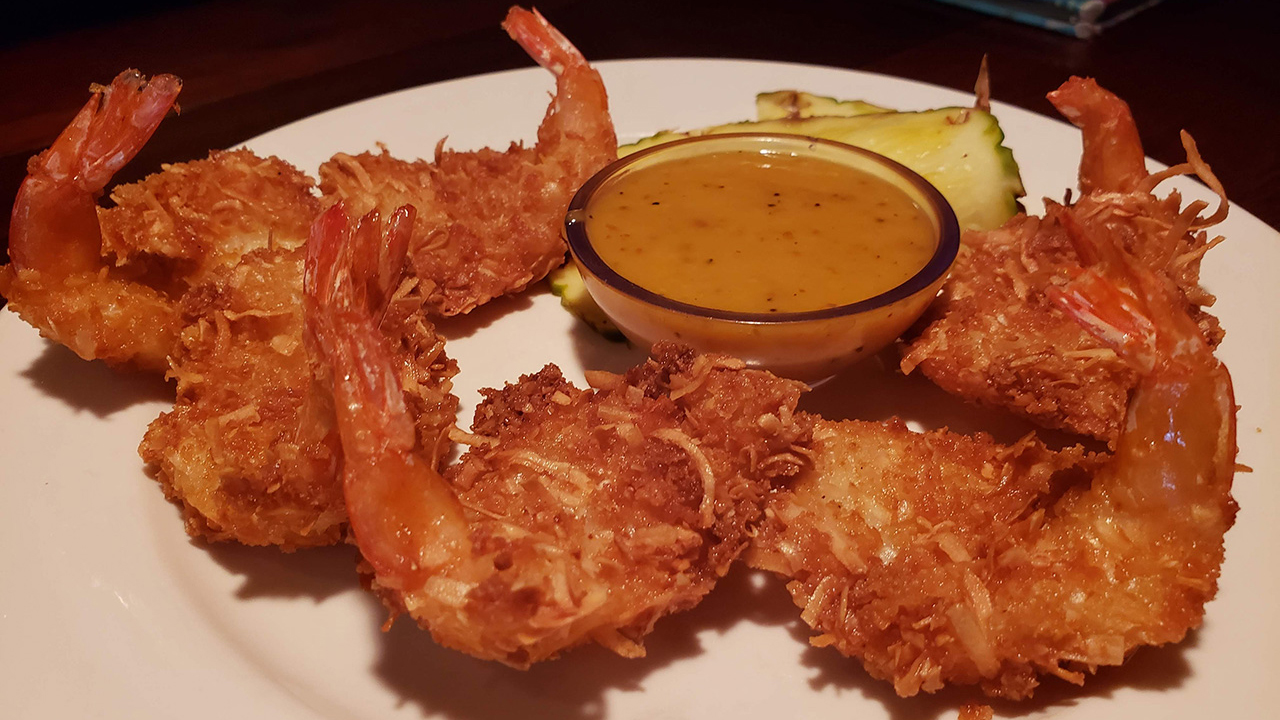 For the lunch entree, Juanita choose the Jerk Chicken Pasta. It was made with sliced jerk chicken breast, asparagus and mushrooms with bow-tie pasta in parmesan cream sauce. I asked if I could taste a little. I was really expecting it to be more spicier; especially since the name of the dish included “jerk”. 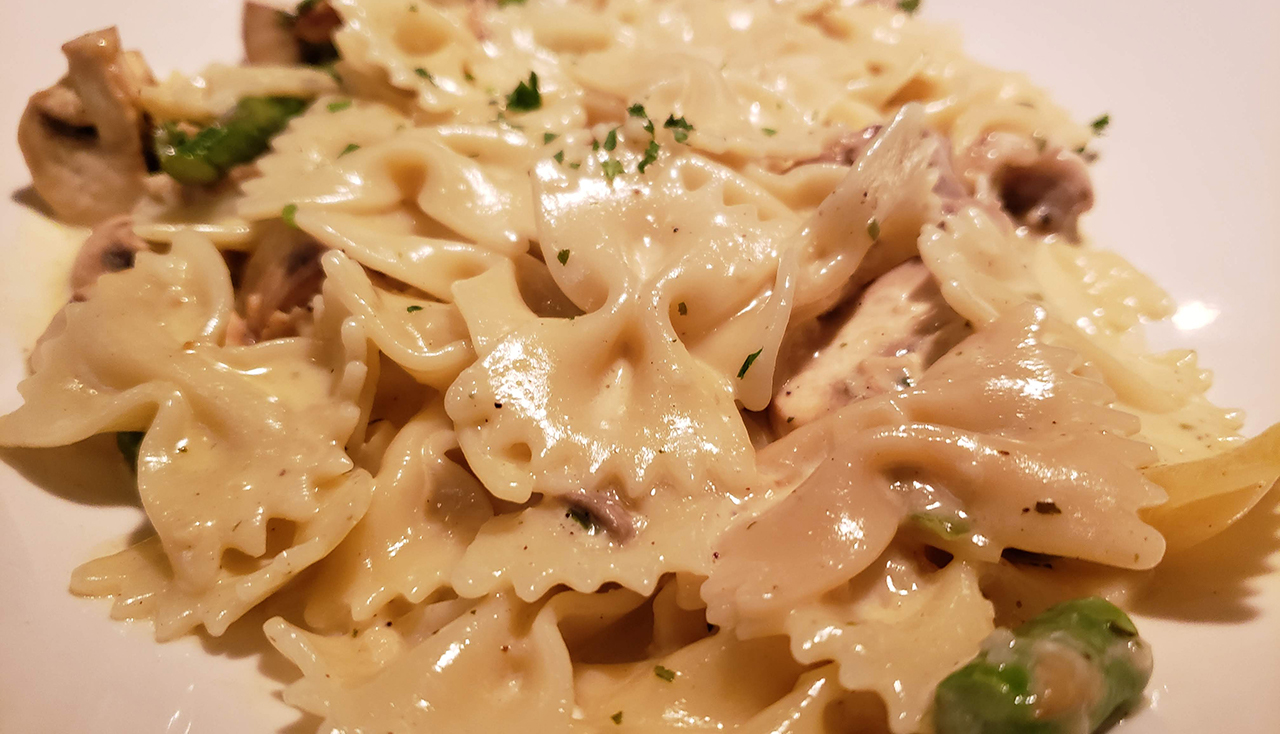 My lunch entree was the Shrimp and Grits.  Now, let me start by saying, I had no clue of what to expect.  I’ve only eaten shrimp and grits at one other restaurant, and that was WishBone. I’ve become pretty picky with the restaurant version of shrimp and grits. If it doesn’t taste like WishBone or better, then we have a problem. 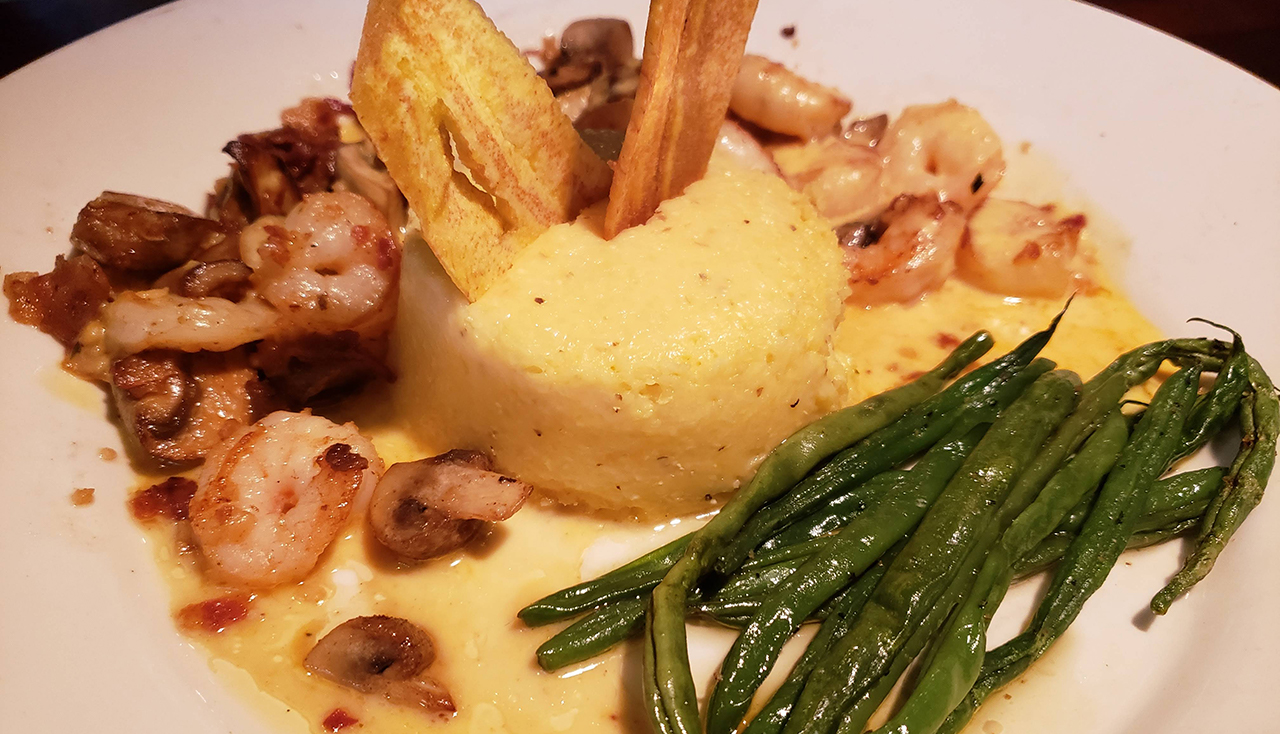 Well we had a problem with these shrimp and grits. It was bland! That’s the best way I can describe it. The shrimp tasted like the pre-cooked shrimp that you find in the grocery store; and then they reheated and added some butter sauce on it or something. What saved the dish was the cheesy flavored grits. That was pretty decent, but of course I don’t have to get the dish again.

Juanita and I went back to the Bahama Breeze in June to celebrate my birthday, which is actually in May, but again because of schedules we’re here in June. I decided to give the restaurant another chance and try something different. This time I ate the Coconut Shrimp for the appetizer and the Lobster and Shrimp Linguine for the lunch entree. The experience was much better, and the food wasn’t as bland. I really enjoyed the citrus mustard sauce that came with the coconut shrimp; and the lobster and shrimp that was in the linguine didn’t taste “fake” or pre-cooked. The linguine was tossed in a brandy cream sauce that made the dish more flavorful. 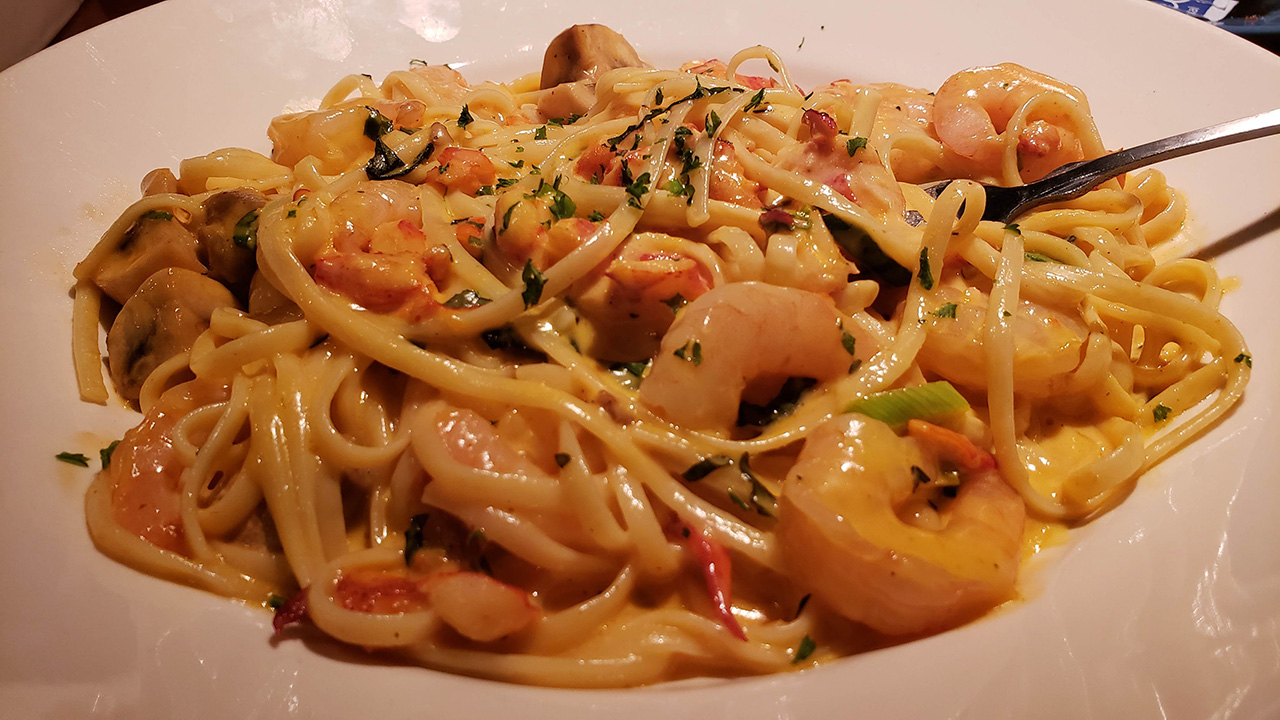 Will I go back to the Bahama Breeze? The food was okay for lunch, but I would have been pissed if that was my dinner and not have another meal until the next morning! I won’t say that I’ll never eat there again, but it may be a few months or years in between.